Type your search terms above and press return to see the search results.

As New Zealand approaches a national election, are we grasping the fragility of both our economy and political system?

Current (right-leaning) National party Prime Minister John Key pointed out that such a tax would affect not only residential property speculators (of whom we have too many), but also small businesses and the farms whose interests his party represents in a long-standing internal coalition with urban conservatives.

Over the last few decades, New Zealand’s income and wealth inequality has become exceptional. A larger share of profits has gone to owners and shareholders rather than the workers who have helped produce them, and who in turn are the customers of other businesses.

Imported capital via bank mortgages has also been directed into our over-priced speculative housing market. That collective debt dwarfs the government’s one. Productive enterprises and assets have been loaded with debt or sold to foreign interests, resulting in permanent national deficits as profits (including from our Australian-owned banks) flow offshore. Our farms are also indebted to the hilt, with farmers increasingly reliant on untaxed capital gains when they sell rather than profits from their production.

All those debts must eventually be paid off – or exchanged for equity until most of this nation is no longer ours. This government is playing a confidence game that it can grow profits fast enough to stave that off. Big gamble, even for a currency trader.

Over time, a CGT could help share accumulated profits back to workers via the government as well as steer investment into productive business rather than property speculation. New Zealand has a desperate need to re-shape our economy away from reliance on extractive primary industries and cyclical commodity markets.

Climate change adds both pressure and opportunity to create a more sustainable future. Shipping highly-designed products, skilled services and ideas rather than milk powder is likely to keep smart young people working and raising families here. There will be more pressure on health and social services as our Baby Boomer bulge reaches their senior years.

A hugely indebted housing and farming sector who have factored untaxed capital gains into their calculations acts as a brake on change. However, the pressure is building.

Earlier in the day a tax law specialist told me he had heard murmurings that National was actually planning to introduce a CGT themselves, after long resistance. We agreed they would probably be inclined to offset it with further personal and company tax cuts rather than social investment. So there may yet be a tax carrot dangled if National’s daily polling by David Farrar’s company Curia shows they need to pull something out of the hat between now and election day on September 20th.

Despite his optimistic opening sentiments, the PM appeared increasingly rattled and curiously disinterested as the debate unfolded. I was invited to be part of the Green Party-hosted parallel event The Green Room ( #greenroomnz ) and ended up standing next to the feisty Lucy Lawless during much of the time as we watched the live feed. She leaned over at one stage and observed that he seemed to be already thinking about his next job in international finance or somesuch.

Then Russell Brown interviewed us. 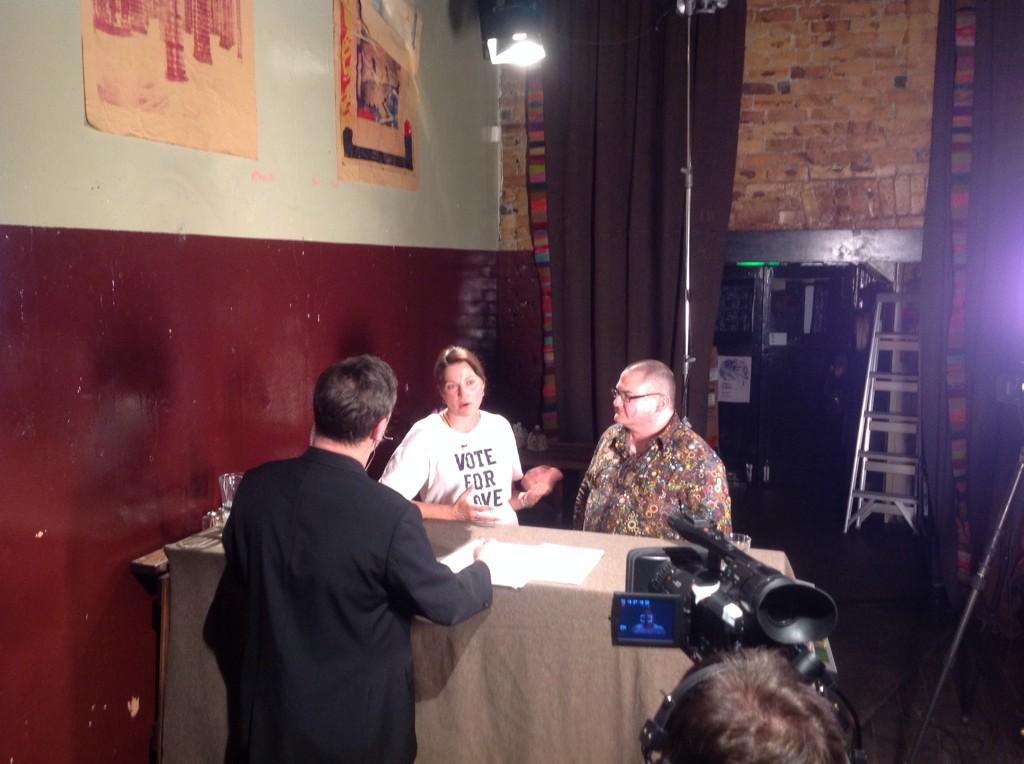 Some hours earlier, Key was confronted with allegations that the Minister he has been refusing to hold accountable over her serial misdemeanours this year may have been doing the numbers to roll him if it would help secure a coalition with a party whose leader personally dislikes him.

That Minister is also central to the network of underhand influence outlined in Nicky Hager’s recent book Dirty Politics which has dominated political discourse with details of collusion by a variety of people who sewer rats would look down on.

Hager delivered a great speech at a Human Rights Fundation-hosted event the night before the debate (watch below). He spoke beautifully about the damage it does to our democracy if we tolerate people and organisations behaving unethically.  As voters we have to take responsibility for the quality of the people we choose to represent us. We need to be able to trust them to make some difficult decisions for our shared future.

Sharing wealth fairly and productively is one of those decisions.

A worldwide Creative Commons Attribution 3.0 Unported License applies to this post. Please attribute content to Sacha Dylan and link back to https://sachadylan.com.

Please read the site protocols, then make your comment below: